One of the mysteries of all ages, there isn’t enough information about it. After all modern and up-to-date technology to study the Sphinx, we still do not know who built it, when, and why? Egyptologists, scholars, professors, historians, or whatever the title is, no one has a clear answer for these questions. We are talking about the Sphinx. A huge sculpture of a crouching lion with a head of a human. It was carved from limestone. obvious that there is no nose or beard. We know where the beard is. It is in the British Museum. But where is the nose? What had happened to it? … we don’t know.

Overview About the Sphinx

Most of the time, the Great Sphinx was buried in the sand of the desert. A 73-meter-long, and 20 meters high entity was completely invisible under the sand. Located in Giza Plateau, on the west bank of the river Nile, facing the three Pyramids of Giza. Its face is in front of the sunrise. Scholars remain in a debate about the story of the Great Sphinx, but they all agree that it is one of the most wonderful statues ever. The Great Sphinx hides a museum inside and hidden tunnels under it.

The Debate About the Great Sphinx 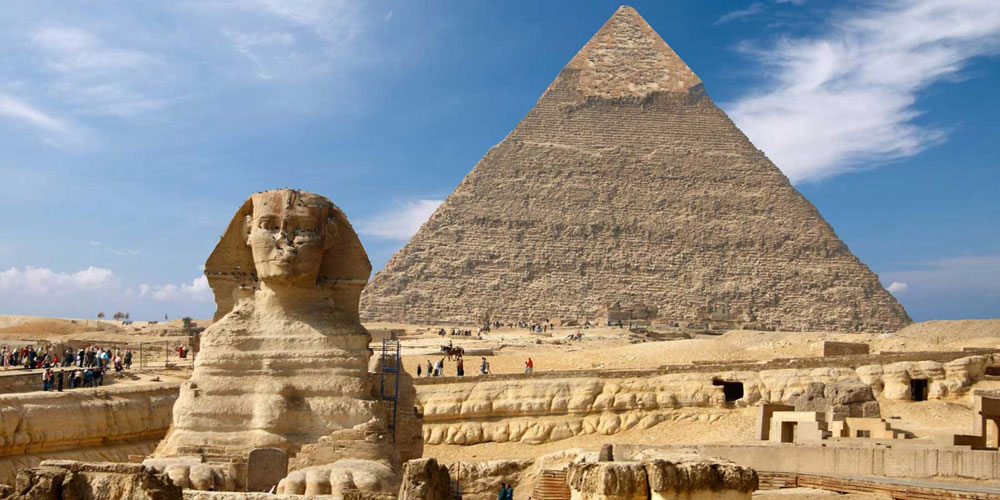 Egyptologists agreed that it is from the Old Kingdom ear of Egypt. Throwing back to the period of time while the Pyramid of Khafre was being built, an order came to the constructors to carve a statue from a huge piece of limestone. Here comes a debate… Another opinion claims that the Sphinx is, even more, older than King Khafre’s era. The manuscripts from which we know about the process of constructing Khafre’s pyramid, show some details about the workers who built the pyramid, but they didn’t show anything about the Sphinx. Other Historians say that it was built by King Khafre’s brother, Djedefre, who was looking to take the throne after the death of their father, King Khufu, the Great Pyramid constructor. For more information, check the Great Pyramid article.

The Secrets Behind Sphinx Name

One of the shocking notes is the word “Sphinx“. This word is not existing in the ancient Egyptian language, it is Greek. So the statue was never known as “Sphinx“. In the New Kingdom era of Egypt, the sphinx was known as Horemakhet. The case of the nose itself is still in debate till now. It was said that it was destroyed by Napoleon troops in 1798-1801 CE. But a painting by the French artist Frederic Luis Norden, in 1737, shows the Sphinx with its nose. So a different opinion explained the destruction of the nose that was caused by the Arab Invasion in the 7th century. The theories also supposed that the head of the Great Sphinx wasn’t meant to be of a human from its first built, and it came under several modification processes until it became like what we see today.

The Factors Which Affected the Great Sphinx

In Fact, the Sphinx was in great danger several times because of a lot of things that affected badly on it. Factors of nature and climate changes, human factors, and time factors. It is believed that being buried in the sand for this long time saved the Sphinx, and without this, the Sphinx may have vanished long ago.

The Dream Stela of King Tuthmosis IV At the Sphinx

Throwing back to 2010CE, some archaeologists found mud-brick walls. These separated walls were forming a large wall. The larger wall stretched 132 meters and it shaped like a circle surrounded the Great Sphinx. Archaeologists assume that King Tuthmosis IV built this wall after “Dream Stela”.

One day, King Tuthmosis IV fell asleep near the Sphinx, while haunting trip. He saw a huge monster came out of the ground and told him if he threw the sand away from the Sphinx, the throne of upper and lower Egypt will be an award. So King Tuthmosis IV ordered to build a great wall surrounded by the Great Sphinx. Unfortunately, the wall wasn’t enough, because the Sphinx buried underneath the sand again.

Theories will say a lot of things, a lot of information, debates, paradoxes, and mysteries about the Great Sphinx. However, all we want is to just put all of this aside and enjoy the glamour of the Ancient Egyptian buildings represented in the statute of the Sphinx. The Great Sphinx is like the great Pyramids of Giza. They are all from Giza Tourist Attractions.

Opportunity to Visit the Sphinx

There is an opportunity to discover the Great Sphinx. Safaga Shore Excursions allow you to stand in front of the Great Sphinx and go on a discovery adventure. We also provide irresistible offers to enjoy your time in the city of Safaga, with the Red Sea shores. snorkeling, diving, scuba diving, and much more activities are there to try … That’s it? No. Safaga Shore Excursions are not limited only to these offers, there are more offers. What are you waiting for?